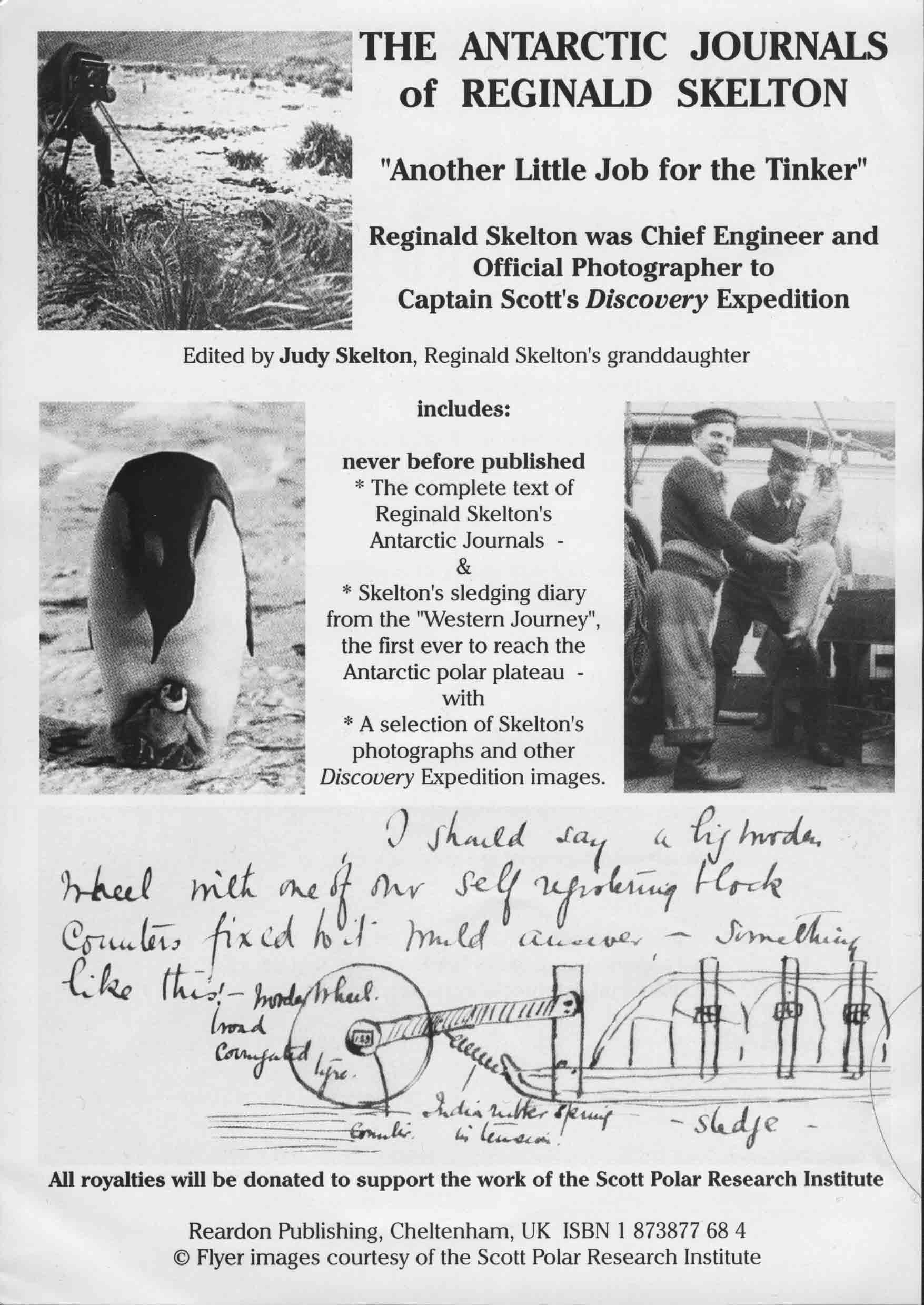 The Antarctic Journals of Reginald Skelton

Reginald Skelton Was Chief Engineer, And Offical Photographer To Captain Scott's Discovery Expedition; My memories of my grandfather are of an old, but still fit and upright, man who had a deep gravelly voice and chuckled a lot. I was only ten when he died in 1956 and he never, as far as I can remember, told me anything about his time in the Antarctic. Forty two years after his death we had, in a sense, changed places and I was getting the full story. By then into my fifties, seated in the library at the Scott Polar Research Institute (SPRI) in Cambridge, I began reading the Antarctic journals of Reginald Skelton, not yet out of his twenties, who had been chosen as Scott's chief engineer on the Discovery Expedition. Directly outside the window in front of my desk was the building site which was to become the bright, airy Shackleton Memorial Library. The archivist, Bob Headland, apologised for the terrible noise of the construction work, which he feared would frustrate any attempt to concentrate, but all I could hear was the sound of the Discovery's bows scrunching through the pack ice and the howl of the Antarctic wind as the ship fought to hold her own in the teeth of storm force Southerly squalls off Coulman Island. Since then I have been back to Cambridge to read the seven volumes of Reginald Skelton's Discovery Journals, and his sledging diaries, more times than I can keep track of but every time something new catches my attention. There is a freshness in this account, written by a young man describing events even as they take place, as he experiences them without knowing what is to follow, which is lost in any retrospective telling of the tale.

Through the publication of this book I hope many other people, who would not otherwise have the opportunity to read the original journals, will be able to share the pleasure of vicarious participation in the Expedition. There is another purpose in bringing this book to the public. Skelton, whose name is by no means universally known, was, nevertheless, an important member of the Expedition and many books about Discovery include quotations from his journals. Since becoming familiar with the journals, I have found out that not all these passages are faithfully reproduced.

I am aware of at least two supposedly scholarly books which contain misquotations from Skelton's journals. Whereas innocent mistakes can be made in interpreting hand-written documents, the distortion in some instances is of an order which suggests deliberate misrepresentation. The present book gives all serious students of the history of Antarctic exploration access to the full authentic text.

Part 2 - In the Ross Sea (12th January to 10th March 1902) 43 - in which - Discovery steams south in search of a safe winter haven - land is discovered on the far side of the 'Great Ice Barrier', the ship reaching further East than any previous expedition - the first Antarctic flight is made by hydrogen balloon - the expedition establishes Winter Quarters in McMurdo 'Bay' to the South West of Ross Island - a number of preliminary sledging journeys are undertaken

Part 3 - The Fading of the Light (10th March to 30th April 1902) 64 - In which - the Cape Crozier party fails to reach the message post and the return of Barne's party ends in tragedy - the ship is frozen in and preparations are made for winter - the engineering department is kept very busy, not least by the troublesome windmill intended to light the ship through the months of darkness - the 'Great Emperor penguin hunt' provides good sport - and spirits are raised with the first issue of the 'South Polar Times'

Part 4 - The First Winter (1st May to 31st August 1902) 82 - In which - the windmill is finally blown to smithereens, to the relief of the engineering department - all types of scientific endeavour continue, only suspended in the wild worst of weather - Bernacchi and Skelton almost perish in a blizzard within a quarter of a mile of the ship - many forms of entertainment are devised to while away the time on board - all hands take exercise outside when they can and experience the magic of the aurora and the profound silence of calm moonlit days - preparations begin for the forthcoming sledging season

Part 5 - Sledging Near and Far (1st September to 29th November 1902) 106 - in which - the expedition's sledgers develop their skills, through numerous short reconnaissance and depot-laying outings, in preparation for the epic journeys to come later in the season - Royds' party succeeds in reaching the Cape Crozier message post with information of Discovery's whereabouts for the relief ship - Skelton, with Evans and Quartley, discovers the first Emperor penguin colony seen by humans and takes the first photographs of Emperor chicks - Scott's party start on their journey to explore as far South as possible - Armitage organises sports to celebrate the King's birthday

Part 6 - Discovery of the Polar Plateau (27th November 1902 to 19th January 1903) 135 - in which - Armitage's 12-man party, including Skelton, set out for the Western Mountains - having ascended the Blue Glacier, they find further progress blocked by high mountains and are obliged to negotiate a s

Reginald Skelton was the Chief Engineer aboard RSS Discovery, accompanying Captain Robert Falcon Scott on his first expedition to the Antarctic from 1901 to 1904. His diaries, edited by his granddaughter Judy, give a fascinating and absorbing account of the dramas, tragedies and adventures encountered by Scott and his men during their two years based at Hut Point. They are published as an almost exact facsimile of the original seven volumes, with previously unseen family photos as well as numerous snapshots of the expedition taken by Skelton himself who was the official photographer.

The diaries start with an account of the construction of the Discovery in Dundee in 1900, continuing with regular entries over the next four and a half years. He gives a personal slant to all the major achievements including the first balloon flight over Antarctica, the first sighting of an Emperor penguin colony and the reception marking Scott, Wilson and Shackleton's safe return from their Furthest South. Interspersed with his acerbic comments and personal anecdotes are extracts from The South Polar Times, sketches by the ship's surgeon and artist, Dr Edward Wilson, as well as maps and diagrams.

An absolutely essential addition to any Polar enthusiast's library.